Learning vocabulary can be an amusing part of learning any language; however, to truly understand French Wordsords, one needs to start with understanding how different parts of speech function in a language.

A part of speech is a category of words that share similar functions in sentences. There are many parts of speech including: nouns,  verbs, adjective, articles, adverbs, pronouns, prepositions, conjunctions, and interjections. Being able to identify these parts of speech can aid in the learning of any language.  It is also helpful to memorize a few examples from each category and to understand the roles that each part of speech plays in a sentence.

Noun is one of the most basic parts of speech. A noun is generally defined as a person, place, or a thing. A noun is the basic building block of a sentence.

In French, nouns generally have a gender. Nouns are classified as either masculine or feminine. The classification does not always make logical sense. For example, the words for purse (un sac à main) and high heels (les talons hauts) are both masculine. The word for mustache (une moustache) is feminine. Language learners have to memorize the genders of nouns as they learn new words.

Articles help indicate whether a noun is masculine or feminine.

A verb is essential to making something happen in a sentence. A verb is a word that describes an action or a state of being in a sentence. Verbs also explain what the subject of a sentence is doing. 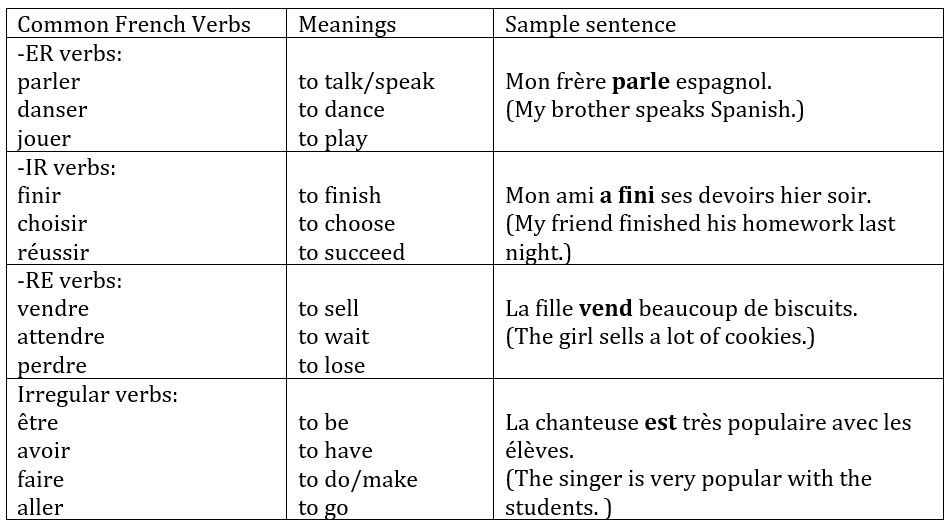 Verbs also function in different tenses (past, present, and future.) There are multiple tenses and moods of verbs in the French language.

French adjectives usually follow the noun they are modifying. However, adjectives will precede the noun when they are being used to describe beauty, age, goodness, and size.

An article is used with a noun to explain whether the noun is specific or general. In French, an article also tells the gender and number of the noun.

All French articles have to agree with the noun in both gender and number.

An adverb modifies a verb, an adjective, or an adverb. It often answers the questions how, when, and where. 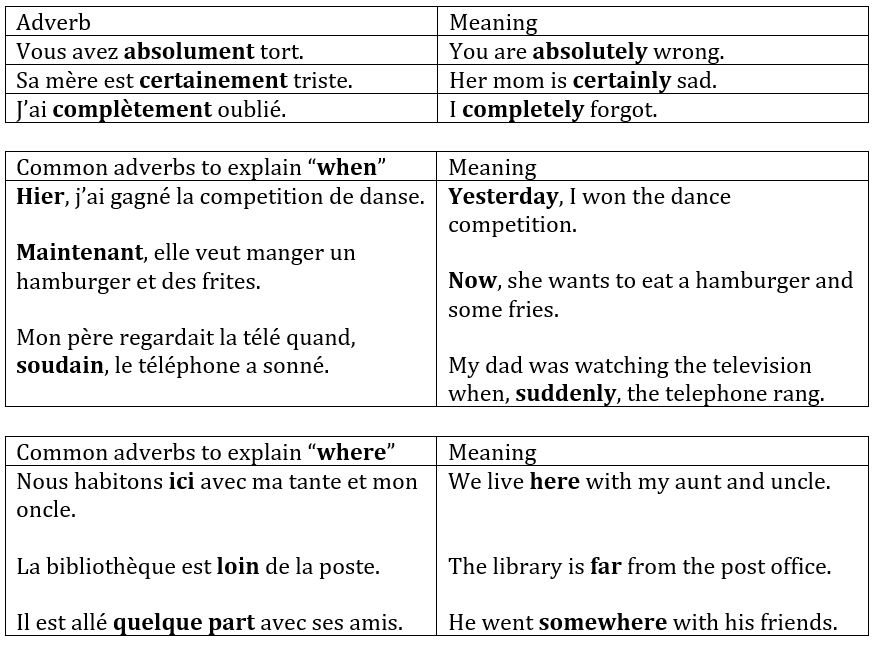 A pronoun takes the place of another noun. There are many French pronouns. They are helpful to use so you do not have to repeat a given noun many times. There are several different categories of pronouns.

Some of the most common pronouns are called subject pronouns.  They function as the subject of a sentence.

Other common pronouns are known as object pronouns. These can replace and object in the sentence that has already been mentioned.

Prepositions are words that connect to nearby words to provide more information in the sentence. They do not  use it independently. Adding prepositional phrases can make your French more descriptive, precise, and fluent.

Conjunctions are words that join together words and phrases. By using conjunctions, your French can be less repetitive by allowing two ideas to combine together.

Interjections are words that express surprise or emotion. These are fun words that often begin a sentence to catch someone’s attention.

To learn more about the French language and to explore these parts of speech in more detail, be sure to check out our other articles!