Nouns are words that name people, things, feelings, ideas and phenomena. They are generally divided in common name (referring to something general) or proper name (identifying a particular person, place, animal, institution). 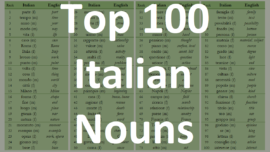 Just like other European languages, Italian nouns have both a feminine and a masculine form. Generally, it is very easy to determine the gender of a noun, based upon its ending.

Study tip! Nouns ending in “-ista” can be both feminine and masculine. For example, farmacista can refer both to a female or to a male pharmacist.

When writing or speaking in Italian, you do not add “s” or “es” to the noun you want to make plural. You just need to change the final vowel. 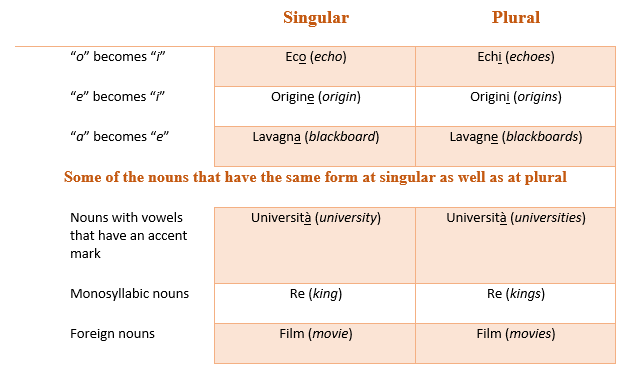 How to use definite articles before Italian nouns

Definite and indefinite articles must be masculine or feminine, singular or plural, in order to agree with the noun. If you want to choose correctly, you just need to take into consideration how your noun ends. Let’s have a look at the following chart!

“Lo” is a definitive article used before masculine singular names that begin with the letter “s” followed by another consonant or that begin with letter “z”. It is also used with other letter combinations, such as “gn”, “pn” and “ps”. Its plural form is “gli”.

“L’” is simply the elided form of “lo”, used before a masculine noun which begins with a vowel. Thus, the “o” is replaced by an apostrophe. The plural form remains “gli”. Although plural forms are not elided, you may still decide to omit part of the article if the word that follow starts with a “i”.

“Il” is the most common Italian definite article. It is used with nouns that begin with any consonant and that do not require the use of “lo”.

Feminine definite articles are easier to use. You do not have to check how the word begins. “La” is the definite articles used with nouns that start with every consonant. Its plural form is “le”. As with its masculine form, “la” is elided when the singular noun begins with a vowel, and it becomes “l’”.

Indefinite articles do not have any plural form. The only thing that you need to remember is that there are two forms for each gender of nouns.