Verbs are an essential part of any language. Without verbs you literally can’t do anything. Nouns and adjectives can only get you so far when trying to communicate. Eventually, it’s time to start conjugating verbs.

In French, there are three main types of regular verbs. These verb groups each follow a similar pattern when they are conjugated:

There are also many irregular verbs in the French language that do not follow these patterns.

The two most common irregular verbs are:

Être and avoir are important verbs to know because they are used as helping (auxiliary) verbs in many French verb tenses:

Verbs can be conjugated in many different tenses. Each conjugation depends on when things are happening and under what conditions.

The main tenses in French are present, past, and future. Some of these tenses have multiple options depending on the conditions and timing of the specific event being described. 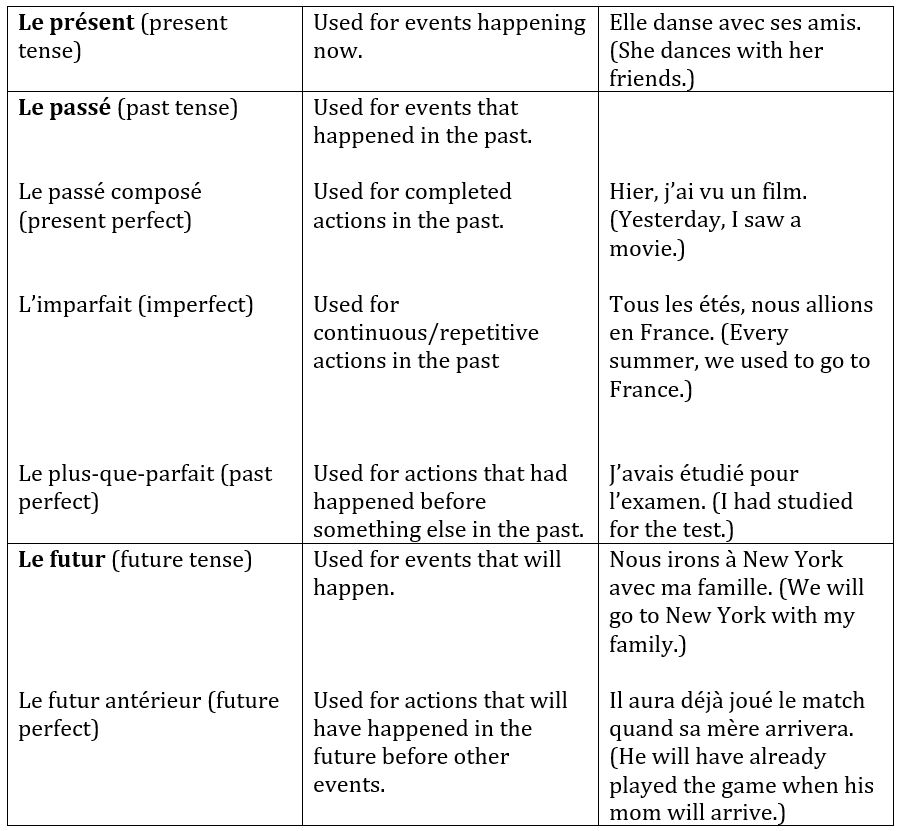 The present tense is used to describe actions or events that are happening right now (in the present.)

French past tenses are used to describe actions that already took place (in the past.) There are multiple past tenses from which to choose in French.

The past tense will often use clue words that indicate that the action has already taken place. Here are a few of those clue words: 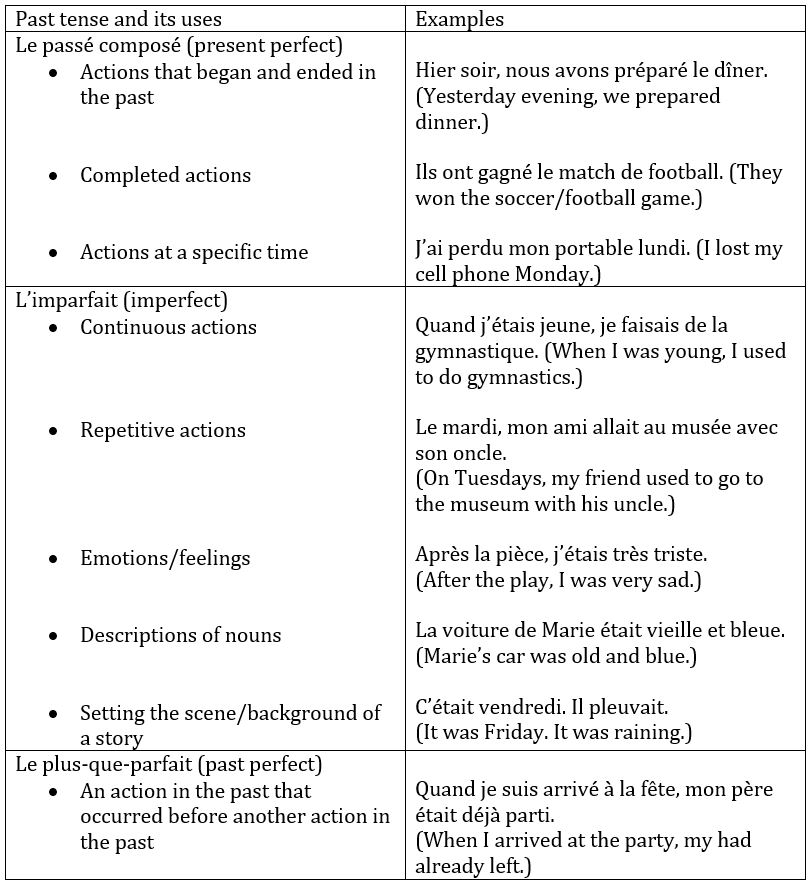 There are even more past tenses French speakers use including le passé simple, le conditionnel passé, and le passé du subjonctif. However, the past tenses described in the chart above are generally the most commonly used past tenses.

Future tense in French is describing events that will happen or will have happened (in the future.) There are multiple future tenses that exist in French.

The future tense will often use clue words that indicate that the action will take place. Here are a few of those clue words: 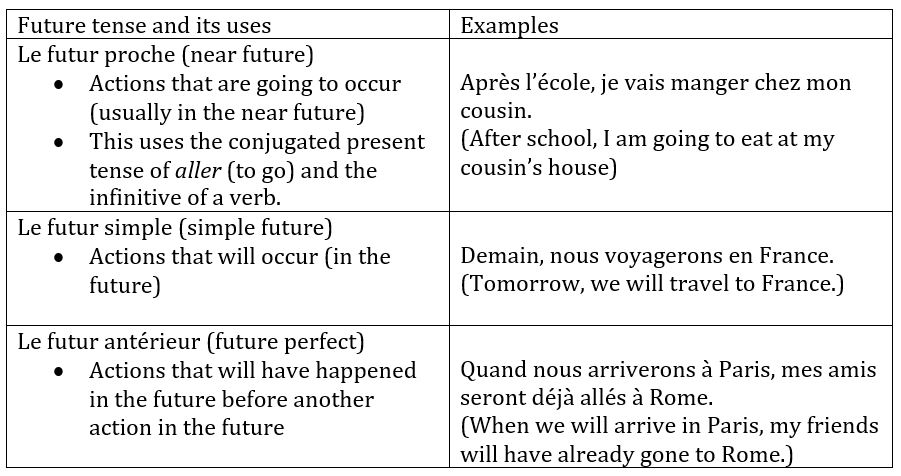 As the name implies, the conditional tense describes what would happen or what would have happened under certain conditions. It usually translates to would, could, or should in English. It is also often used in si-clauses (sentences using “if.”) 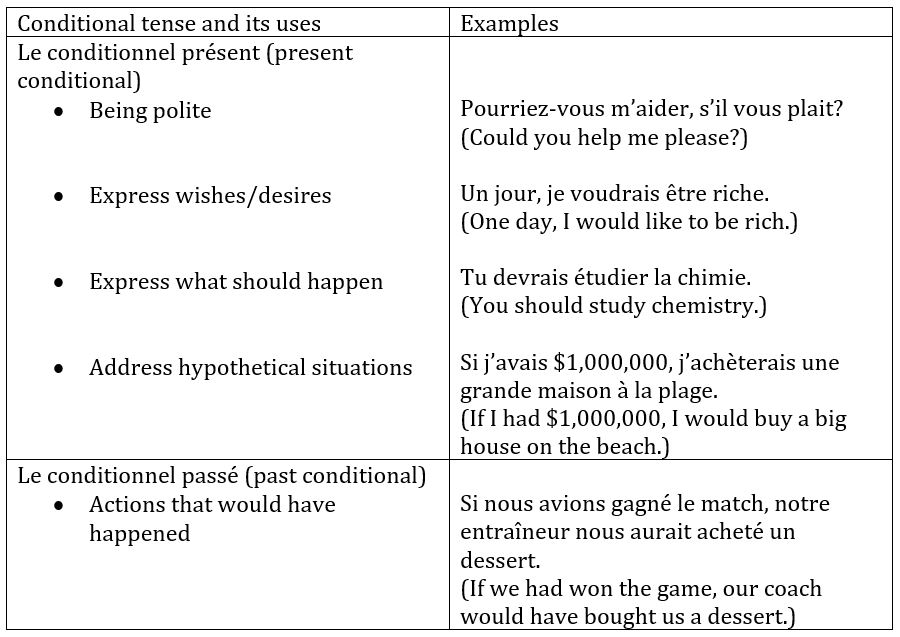 We are usually considering the imperative of a verb in the command form. If you want to order someone to do something in French, you use the imperative. It is used with the subjects: tu and vous. Use “Tu” with friends or people with whom you are familiar. It is the informal “you.”

Va au concert avec moi. (Go to the concert with me.)

Do not use The word “tu” in the sentence because it is “understood” or “implied.”

We are not using Vous with adults or people you may not know very well. We are using it when addressing more that one person. It is the formal and the plural “you.”

Do not using the word “vous” in the sentence because it is also “understood” or “implied.”

We are forming Negative commands by placing ne…pas around the verb in the imperative:

We also use imperative to make suggestions. In this case the verb is in the we-form (nous.) We are not using “Nous” in the suggestions.

If you want to study other lessons about French tenses, don’t forget to check out our other articles!

To know more French Words, click HERE to find out and learn.