First of all, let’s start with understanding what an adverb is. It’s one of the eight parts of speech and its role is to modify and describe a verb, an adjective, a preposition or an adverb.  An adverb gives information about when, where, how, how often something was, is, would, should or will be done.  Compared to the other parts of the speech that have to agree in number and gender, French adverbs are invariable, which means their spelling doesn’t change. The only things you need to know about French adverbs is how they are formed and specific placement rules.

How to form French adverbs

As a general rule, the adverb is formed by adding – ment, same as in English when you add – ly to adjectives to form an adverb. For example “honest” + – ly = “honestly”.

The same rule is applied in French. By adding the suffix – ment you can transform an adjective into an adverb.

However, there are always some more rules and exceptions

There are some exceptions with irregular adverbs, those that don’t follow any rules:

With these adjectives, you would normally use the 2nd rule, however the rules don’t apply on these ones.

Here’s a spreadsheet with different types of adverbs with examples 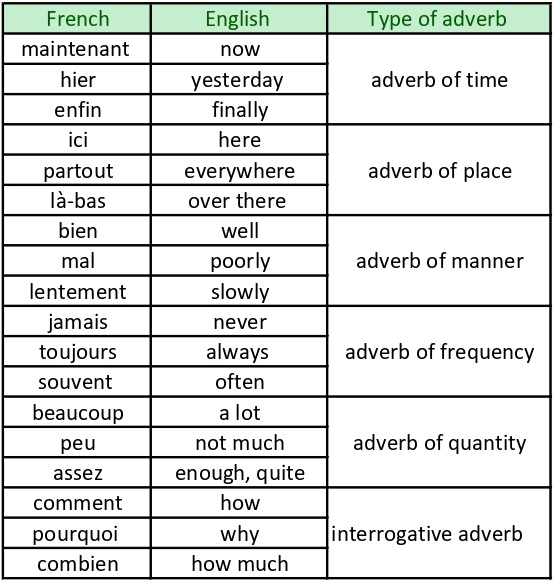 Where to place French adverbs

There are two general rules when it comes to understanding the placement of adverbs in the French language.

And this is it! Make sure to practice forming adverbs, but don’t forget that they are still a separate form of speech, so you will have to learn them by heart. Good luck!